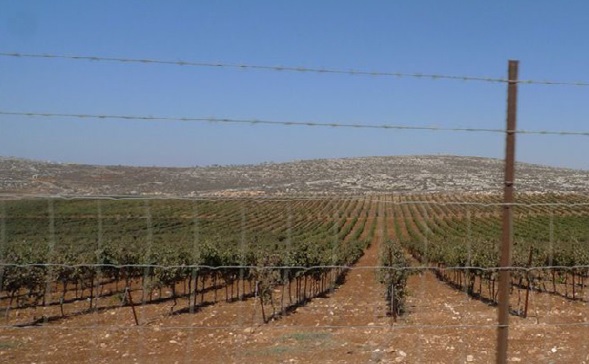 photo: from Forbidden Fruit: The Israeli wine industry and the Occupation (whoprofits, 2011)

“Israeli wine” event scheduled to be held at Ginza Mitsukoshi store in Tokyo till October 3rd, 2017 has been backed off after civil society in Japan raised their concern about their products made in illegal Israeli settlements. According to the Facebook post by the distributor of Israeli wine “Naturael”, they have significantly cut down the wine list and shortened their event period.

Half century-long occupation of Golan Heights by Israel is not just about land theft by military force but it is about depriving Palestinians from accessing its biggest water source. Moreover, Israeli settlement in the West Bank is one of the pillars of apartheid Israel that treats Palestinians inhumanly, together with the construction of apartheid walls, blockade of Gaza Strip and discrimination of Palestinian citizens inside the Israeli territory. In general, agriculture and agrotechny industry in Israel come at the expense of human rights, life and industry of Palestinians.

As these facts are known by more people, legal and voluntary boycott movements of businesses in Israeli settlements are gaining momentum in many countries and regions. In Japan, the Ministry of Foreign Affairs posted a warning on their website in July 2017 that “settlement activities in the West Bank including East Jerusalem are in violation of international law and one must be aware of the financial, reputational and legal risks when involving with economic activities in these areas” (http://www.mofa.go.jp/mofaj/area/israel/data.html *in Japanese only).

The prompt action of Ginza Mitsukoshi store, responding to the voices from the civil society shall be highly appreciated in accordance with the values of international human rights, justice and peace.

We strongly wish that other department stores and companies will learn from this speedy and concrete action taken by Ginza Mitsukoshi this time and take a strong stance against Israeli businesses related to occupation, military and settlement.