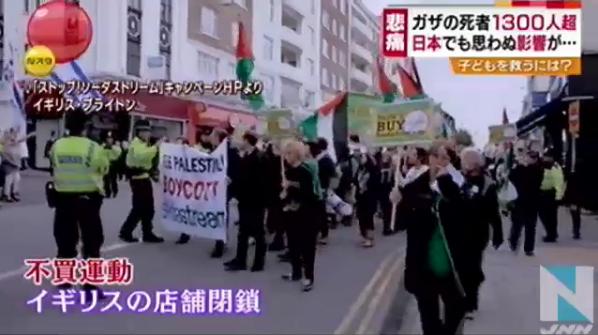 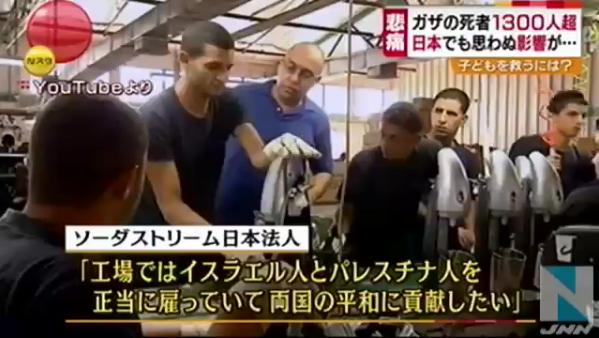 TBS, one of the main Japanese TV stations, covered the boycott movement of SodaStream and its effect in Japan at July 31, 2014.

SodaStream Japan announced the cancellation of their promotional cafe event “SodaStream in BC426” on July 28, mere days before its widely advertised opening.
http://wahutimes.com/sodastream-in-bc426

In a press conference by SodaStream Japan on June 19, they announced the plan to use the existing “Bakery Cafe 426 Omotesando” space from August 1 to 17 to promote the home carbonation device in Omotesando, a district famous for youth culture and shopping for international brands such as Louis Vitton and Gucci.

According to an article by the Tokyo Shinbun on July 29, the cancellation of the event has no relationship to the boycott movement. However, on July 17, "Stop! SodaStream” Japan had sent a letter to the Sumida Trading Company, the company that operates the “Bakery Cafe 426 Omotesando,” informing them that renting its space for this event would mean supporting the massacre of the Palestinian people and cooperating with continued violations of human rights through the illegal Israeli settlements, such as the one where SodaStream machines are manufactured. When we called to confirm receipt of that letter on the 21st, a staff person informed us that the contract with SodaStream Japan was not yet finalized and there was a possibility that the agreement could be annulled. In another phone call on the 23rd, we were informed that the top management of the Sumida Trading Company had decided not to rent the space for this event.

Although Sumida Trading didn't admit the cancellation was related to recent violence in Gaza, it is apparent that the current situation pushed them to make the very unusual decision to drop the event despite already widely advertising it. Since the beginning of the Israeli aggression on Gaza, the “Stop! SodaStream" campaign in Japan has held several protest rallies and put out numerous publications about the violence wrought by Israel’s illegal actions in Palestine. This information has been spread on the streets and through the use of the internet and social media, helping the public understand the connections between the SodaStream brand and ongoing oppression of the Palestinian people.

On the day just before the announcement of the cancellation of the "Soda Shop", there was a protest in front of Yodobashi-Umeda, one of the biggest home electric appliance stores selling SodaStream in Japan. Protesters made public statements and demanded the immediate end of Israeli aggression on Gaza by ramping up international pressure including through boycotts of companies like SodaStream.
http://www.ustream.tv/recorded/50574424 (from around 20min)

"Stop! SodaStream" Japan believes that the failure of SodaStream Japan to open its planned propaganda shop is another victory in the worldwide BDS movement. It is also a sign of the inevitable bankruptcy of businesses that are complicit in the occupation and ethnic cleansing of Palestinians.